How many of you baby boomers don’ t use Facebook? I’m betting quite a few. If that’s the case, how are older and web-challenged fans supposed to watch the Mets-Phillies game on Wednesday, which is only being broadcast on the world’s most omnipresent website?

The answer? They can’t.

Major League Baseball made a deal in the offseason with Facebook to broadcast 25 games this season, exclusively on their platform. These games will not be available to be viewed anywhere else. The April 4 Mets-Phillies game is the first broadcast.

There are hoards of Americans who stay away from Facebook religiously and then there are some who have no idea what it its or how omnivorous the application has become in recent years. It is the world’s third most popular web destination behind Google and You Tube (which is owned by Google) with 1.4 billion active users.

Unfortunately for Major League Baseball, much of their core viewers, the over-50 crowd, are not among that demographic. They will have to resort to radio for this one. Sports bars and other businesses that rely on baseball and sports broadcasts will also be out in the cold. That is, unless they know how to broadcast Facebook on their TVs.

The Mets, who usually broadcast on SNY, their provincial network, appeared to be reluctant about the venture since they do very well ratings-wise. Here’s their take:

Major League Baseball and Facebook announced a historic agreement to produce and distribute weekly afternoon games for Facebook…A 25-game package starting tomorrow with the Phillies-Mets game which will be available exclusively on Facebook Watch in the United States… In the US, the live video of these 25 games will exclusively be accessible on Facebook Watch and will not be on television or any other digital platform such as MLB.TV or MLB At Bat…MLB Network will produce the games, Game broadcasters will be announced on an on-going basis…Fans who log onto Facebook will search “MLB Live” to watch the game…MLB’s partnership with Facebook furthers the future of the game beyond traditional television…New digital engagement opportunities connect fans through technology.

The game will be covered by neutral broadcasters, just like any other national game.  Scott Braun, Cliff Floyd and John Kruk will be in the booth with Alexa Datt as the in-game reporter. 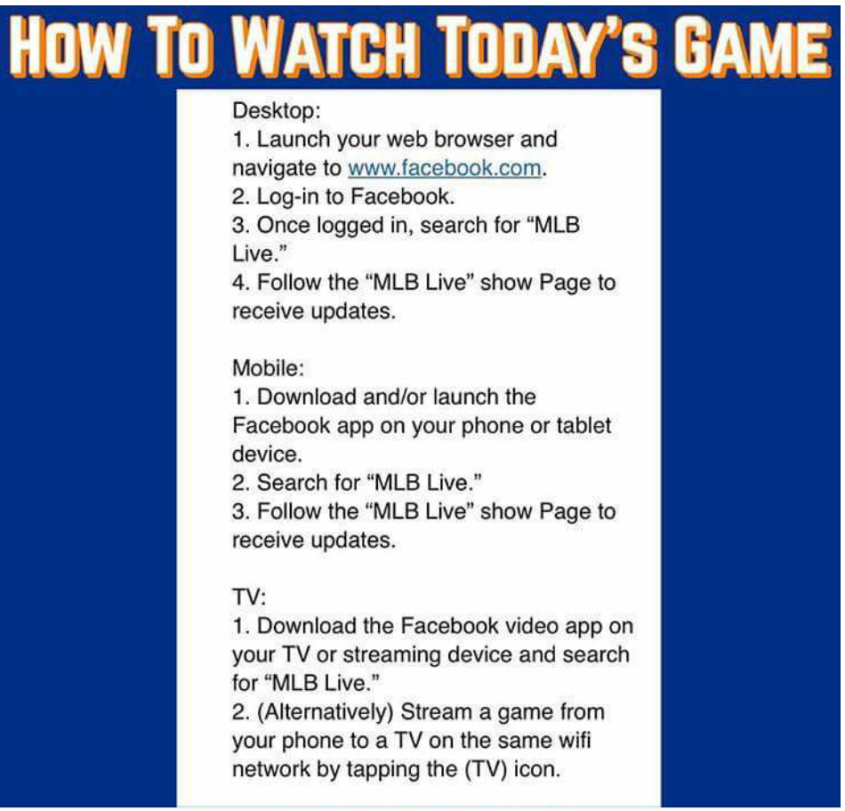 SNY will still provide the postgame show at approximately 5pm and will air a replay of the game on Wednesday night, as they have the option to do so.

SNY will show a replay of this afternoon’s Phillies-Mets game at 8 p.m. The live account of the game, slated for 1:10 p.m., is a Facebook exclusive https://t.co/BTY4yJPIjd pic.twitter.com/BctWlnXLzm

The migration of television to the web is not a new concept. It is the future. But baseball fans, especially dyed-in-the-wool ones, have yet to grasp that and they can’t be blamed nor should they be punished.

Personally, I will find a way to watch web-exclusive events. But that’s me. Even though I’m in my late-50s, I’m in the minority in my age bracket and above when it comes to using newer technologies.

Until the world becomes a completely digital marketplace, MLB and other leagues would be best served to provide a catchall option for the senior and web-challenged audience.

John Fennelly’s latest novel is available on all major book sites in paperback and ebook form. Click HERE to get your copy.

Listen to the Podcast

Listen to THE GIANTS GUYS

Mets Blow Another One